The following story is brought to you courtesy of PJ Media. Click the link to visit their page and see more stories.

At his speech on Saturday, Trump hit Biden on the border crisis and suggested that the crisis vindicated his successful policies — the policies Biden abandoned. A recent poll suggests Trump is correct.

Americans may give Biden a high approval rating overall (59 percent) in the new Harvard/Harris poll, but the poll also revealed serious cracks in his support and his message. Americans want Biden to work out a compromise deal with Republicans on infrastructure, and they are beginning to see the Republican Party more favorably.

An overwhelming majority (80 percent) of voters said that illegal immigration is either a very serious (43 percent) or a somewhat serious (37 percent) issue, and most voters (63 percent) correctly said that the number of monthly illegal immigrant border crossings has increased since Biden took office. 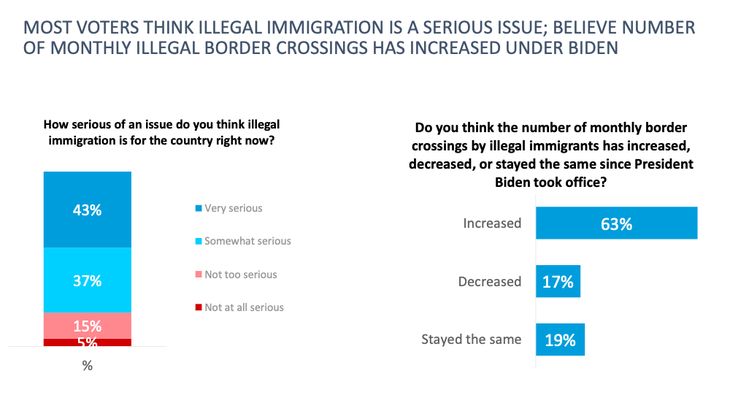 Most voters (68 percent) said Biden’s executive orders on immigration encourage illegal immigration, and a majority of them (55 percent) said “the Biden administration [should] have left those Trump policies that made it more difficult to come into the country in place.” 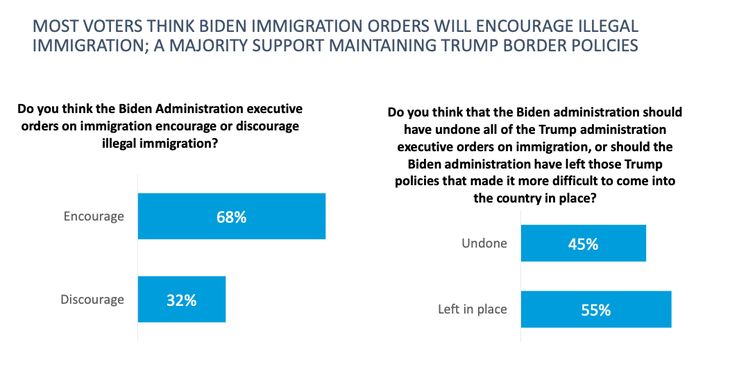 More voters blame the Biden administration (61 percent) than the Trump administration (39 percent) for “the flood of tens of thousands of unaccompanied minor children” coming to the border. Voters also prefer turning illegal border crossers back to Mexico (67 percent) rather than releasing them into the U.S. with a court date (33 percent).

Voters also gave Vice President Kamala Harris poor marks on the border crisis. A plurality (44 percent) said she has done a “bad job” addressing the “root causes of illegal immigration,” while only 30 percent rated her job as “good” and others (26 percent) called it merely “adequate.” A plurality of voters (40 percent) also said Harris’ trip to Central America made “no progress,” while fewer voters said it made “meaningful progress” (21 percent) or “some progress” (24 percent).

Voters also said the economy is improving primarily because of the COVID-19 vaccine (54 percent) more than because of the Biden administration’s policies (46 percent). 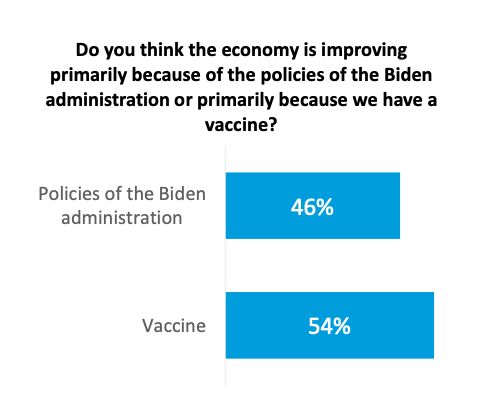 A vast majority of voters (85 percent) said that they were either very concerned (45 percent) or somewhat concerned (40 percent) about inflation, which Biden’s profligate spending has arguably worsened. 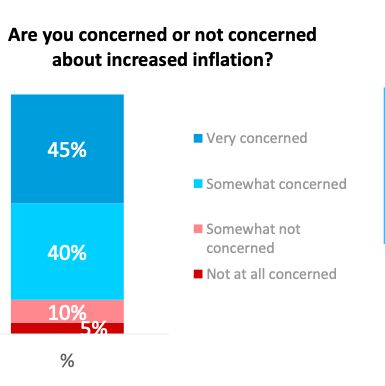 Voters also opposed the idea that schools should teach Marxist critical race theory in schools. Sixty-one percent said that elementary schools should not teach kids “that America is structurally racist and is dominated by white supremacy,” the conclusion of increasingly mainstream CRT, which has sparked a civil war in education.

Democrats have obfuscated the issue, claiming that concern about CRT is a “conspiracy theory” or even a manifestation of white “privilege.” Such claims effectively erase the black parents, black teachers, and Asian organizations that have rightly condemned CRT. The fact that 61 percent of voters told Harvard they oppose CRT in schools underscores the cross-racial opposition to CRT. 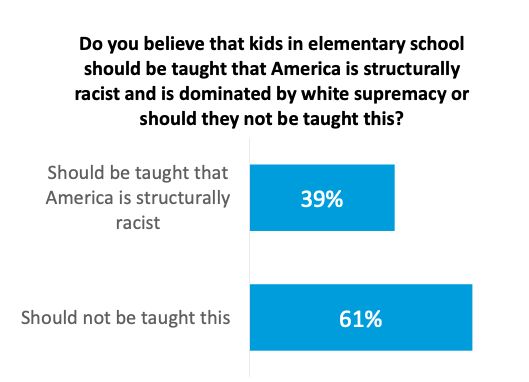 These findings vindicate Trump on the border crisis, his vaccine effort through Operation Warp Speed, and his vocal opposition to CRT. Biden and his fellow Democrats may try to wiggle out of these issues, denying their importance or — as Harris recently did — trying to blame Trump for them. This poll suggests that Americans see through their obfuscations.

The Crocodile Tears Flow From Adam Schiff During First Day of...

ONE Look at Trump’s Crowd during Turning Point Rally vs Biden’s...

Joe Biden’s Honeymoon Looks to Be Over and That’s Bad News...