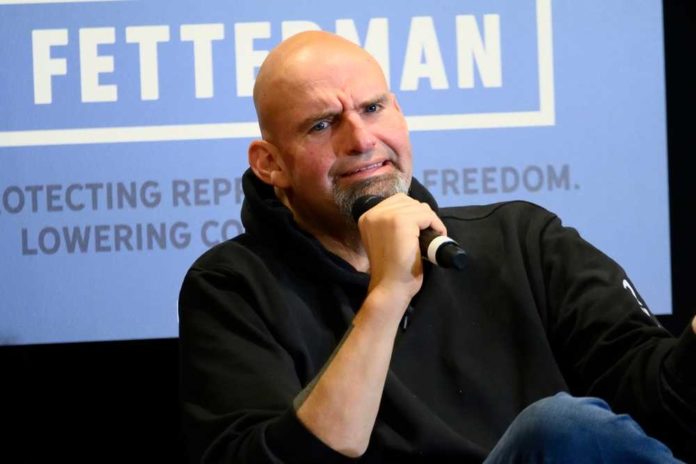 Democratic Senate candidate John Fetterman (PA), according to a complaint from the Center for Accountability and Government Ethics, purchased property worth $75,000 from his own nonprofit for just $1,100.

Fetterman Bought Land From His Own Nonprofit At Fraction Of Market Value In Eyebrow-Raising Deal With Deputy Mayor, Complaint Alleges https://t.co/zpME4EvXbk

Fetterman, who served as the mayor of Braddock, PA from 2006 to 2019, owns eight properties in the area including several vacant lots. One of those vacant lots is the one in question.

The complaint states, “During his term as Braddock Mayor, Mr. Fetterman established a non-profit called Braddock Redux. Its stated purpose was: “revitalization through the creative re-use of existing structures….” Fetterman was the President of the Board of Braddock Redux and the only other board member was Vice President Jebediah Feldman.

The complaint said, “The transaction history, the minimal value of the sale price of the property to Mr. Fetterman, and the magnitude of the discount of the property in question when compared to other properties on the same block give rise to the appearance of improper conduct. The president of a non-profit organization directing the organization to sell an asset to the president at a below-market rate would appear to be a clear violation of fiduciary obligations.”

A spokesperson for Fetterman, Joe Calvello, did speak with the Daily Caller, the organization that broke this story. He did not, however, discuss the property in question or offer any answers as to why Fetterman was given the property for 8% of its market value.

Calvello said, “This is a frivolous and ridiculous complaint filed by a radical, far-right dark money group supporting Dr. Oz. John started Braddock Redux nearly two decades ago to help disadvantaged young people in Braddock and the surrounding area, and to create a community center for them. He is tremendously proud of what they accomplished while he was involved in terms of creating opportunities for Braddock youth, combating economic insecurity, helping reduce crime and gun violence, fostering a local arts resurgence, saving and restoring historical properties, and creating the Nyia Page Community Center to serve as a gathering and activity space for Braddock.”

Mehmet Oz (R-PA) has been gaining ground on Fetterman over the past few weeks, and the race is currently almost dead even. Information like this could swing the election to the GOP.