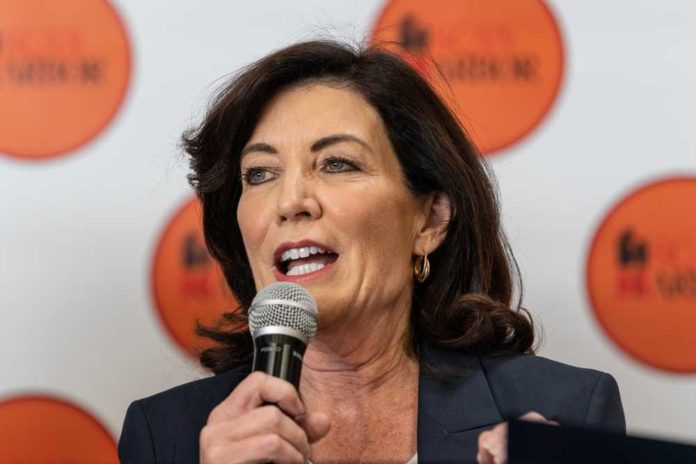 Democratic New York Gov. Kathy Hochul held a rally in New York City on Saturday in a bid to maintain the narrow lead she had over Republican rival Lee Zeldin in most of the latest polls.

While most of the attendees were supporters of the incumbent governor, several protesters were also present — including one woman who displayed a sign urging New Yorkers to “vote red” on Tuesday.

The protester’s sign also included an image of Hochul alongside the phrase: “Vote them out.”

Although her protest was by all accounts peaceful, video footage from the event revealed the moment that a pair of apparent Hochul supporters became confrontational.

The pro-Zeldin protester, identified in subsequent media reports as Angelica Torres, spoke to a local news outlet about the frightening incident.

At the Rally for governor Hochul a counter protesters was choked during the protest. I spoke with the woman who was attacked. Here's what she had to say pic.twitter.com/c60ad9LoiQ

“A woman — a very large heavyset woman, I’m assuming, you know, might have been a man — came and took my sign,” she began.

At that point, she said that she attempted to take the sign back, prompting other attendees to intervene.

“There was another man that came and choked me, and there were two other people that were coming and preventing me from trying to get my sign,” the woman added.

One of the individuals involved in the confrontation was reportedly a Democratic council member representing Brooklyn’s Prospect Heights district.

She made it clear that she “never wanted to get physical with anyone,” lamenting the fact that others in the crowd were not capable of accepting a different viewpoint.

As she later explained to Fox News, the attack merely buttressed one of the primary reasons that she is supporting a Republican candidate.

“I was very shocked and upset that I couldn’t express my opinions openly without violence,” she said. “Crime and violence is a big issue in our city.”

During a campaign event in July, Zeldin himself was attacked by a protester who reportedly attempted to assault him with a sharp object.

At that time, he asserted that the incident supported his call for “bold leadership,” adding: “We need the governor right now to be advocating for this because it’s the right thing to do for public safety, for security, for rising crime.”