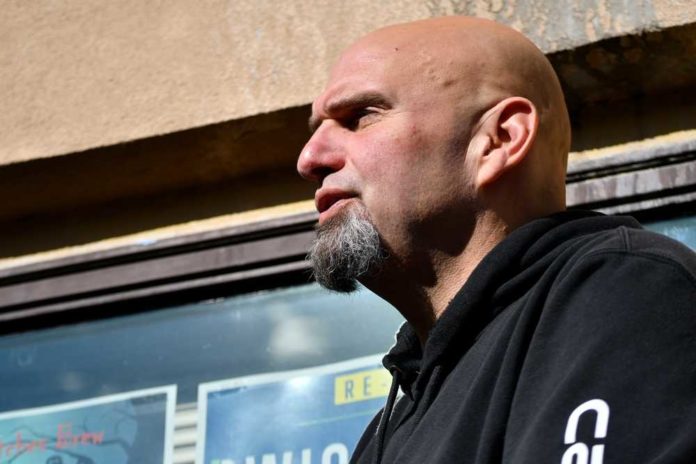 During election coverage on Wednesday, MSNBC host Katy Tur suggested that Pennsylvania Lt. Gov. John Fetterman, a Democrat who just won the state’s Senate election, could have a future as a presidential candidate.

Fetterman defeated his Republican opponent, Dr. Mehmet Oz, receiving 50.7% of the vote compared to Oz’s 46.9% with 95% of the vote reporting in, according to the Associated Press.

While acknowledging that there are “some variables, obviously,” Tur argued that Fetterman would make a good presidential nominee.

“Fetterman, as a nominee, at some point, for president, I know there are some variables, obviously,” the MSNBC anchor said. “Just a few. But I just — you know, what he did in the super red, deep red parts of Pennsylvania and the way that he ran ahead of Biden… ran ahead of Trump, I mean, it just makes — it makes you wonder about his future.”

Deranged libs on MSNBC are already salivating over a Fetterman Presidential run:

"It just makes you wonder" pic.twitter.com/flV9sdSytl

Fetterman managed to win the Pennsylvania Senate race in spite of significant health problems and concerns over his cognitive abilities.

In May, just before he won the Democrat primary for Senate, Fetterman suffered a stroke — which caused what appears to be an auditory processing disorder, where the Democrat is unable to comprehend words spoken to him and requires the use of closed-captioning to understand even the most basic conversations.

His inability to communicate properly has been a concern for some time, and led to many arguing that he should drop out of the race to focus on his health.

How is Fetterman still in the race? This is just sad. It makes me feel sad. pic.twitter.com/cmr7CsPydS

Fetterman’s campaign even insisted an accommodation be provided during his debate with Oz — the use of a closed-captioning device. Following the event, in which the Democrat performed poorly, his campaign tried to blame the captioning for his failure. Fetterman’s communications director, Joe Calvello, claimed that, throughout the debate, there had been “delayed captions filled with errors.”

That claim was quickly refuted by the network that hosted the debate, with Nexstar chief communications officer Gary Weitman releasing a statement that revealed that the Fetterman campaign had actually failed to take every available opportunity to practice using the closed-captioning system.

“Both candidates were offered the opportunity for two full rehearsals with the same equipment used in tonight’s debate; Mr. Fetterman chose to do only one,” the statement continued. “In fact, Nexstar’s production team went to extraordinary lengths to ensure the effectiveness of the closed captioning process, and to accommodate several last-minute requests of the Fetterman campaign. The closed captioning process functioned as expected during rehearsal and again during tonight’s debate. We regret that Mr. Fetterman and his campaign feel otherwise.”

Nonetheless, Pennsylvania voters chose Fetterman in Tuesday’s midterms, and Oz has conceded the race — noting in a statement that he had congratulated Fetterman on his victory.

“This morning I called John Fetterman and congratulated him. I wish him and his family all the best, both personally and as our next United States Senator,” Oz’s statement read. “Campaigning throughout our great Commonwealth was the honor of a lifetime, and I will cherish the memories and the people I met. Pennsylvanians showed up with passion and a vision for a bright future that I found inspiring every day. I want to thank my supporters, so many of whom worked tirelessly to spread our message and support me and my family.”

NEW: Mehmet Oz says in a statement that he called Democrat John Fetterman to congratulate him after projected win in Pennsylvania.

“I wish him and his family all the best, both personally and as our next United States Senator.” https://t.co/slvezFWlqd #Election2022 pic.twitter.com/2cgI483y2L