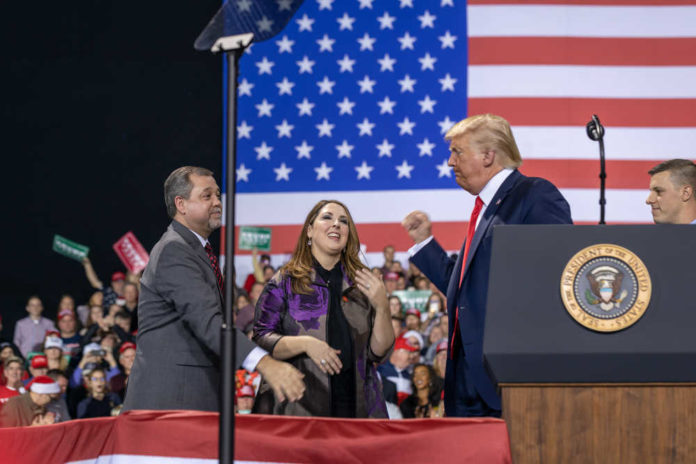 Republican National Committee Chairwoman Ronna McDaniel quipped that Rep. Madison Cawthorn’s “Dark MAGA” sounds like a “Star Wars” thing. McDaniel, being interviewed on Fox News Sunday, guessed that it could be related to the dark side of the Force.

Cawthorn, the scandal-plagued first-term representative from North Carolina, lost the GOP primary Tuesday by State Sen. Chuck Edwards. He conceded defeat but proceeded to endorse a scorched-Earth approach to politics — a dark MAGA that will “truly take command.”

In a Thursday Instagram post, Cawthron called for the end of “genteel” governance and the rise of a new right. To defeat the enemy, he proclaims, “cowardly and weak members” of his own party must be overcome. He did not name those members.

He added, “their days are numbered. We are coming.” Cawthorn went on to post a list of people who defended him when it was not the popular thing to do. Included are former President Trump, Rep. Marjorie Taylor Greene (R-GA), and Fox News host Tucker Carlson.

McDaniel seemed more amused than worried about the 26-year-old’s warning. She complimented him for conceding after a “well-fought” campaign and emphasized the importance of the GOP holding onto that district in the November midterm.

She did, however, take to task any Republicans spending time fighting with colleagues instead of helping to oust Democrats this fall. McDaniel says that needs to be the focus, not constant intra-party bickering.

Cawthorn did himself few favors with his words and actions after winning his district in Western North Carolina. Notable is his calling Ukrainian President Volodymyr Zelenskyy a “thug” and his government “evil” as the country attempts to fight off the Russian invasion.

It is inevitable that intra-party squabbles break out when the stakes are so high. Just look at the Democrats, who have the “Squad” on one side and maverick moderates on the other. But when the dust settles, as McDaniel correctly notes, it’s time for all of that to move aside and stand together.

This is hopefully something Mr. Cawthorn shortly learns.