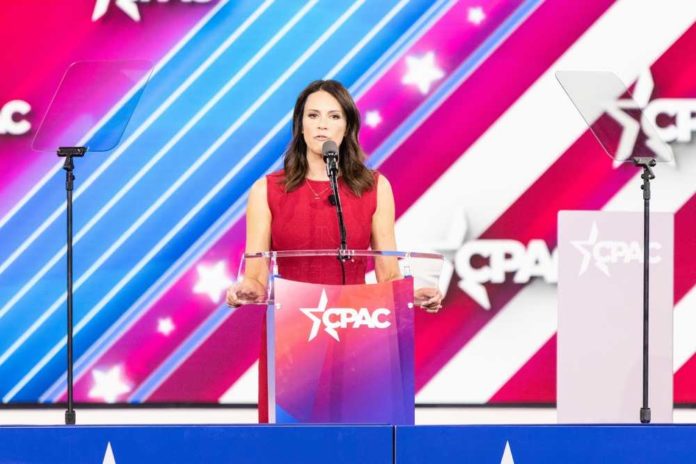 In Michigan, Republican Tudor Dixon is campaigning to become the state’s next governor. This puts Dixon directly up against Gov. Gretchen Whitmer (D), who is also in the race to secure a second term.

Thus far, the legacy of Whitmer’s governorship involves stringent COVID-19 lockdowns, repeated abuse of emergency powers, and forcing small business owners into extinction. Whitmer also dropped the ball in a number of other areas in Michigan. Though she does not want to get into her record.

As Dixon challenges Whitmer for the governor’s mansion, the Michigan Republican is railing against radical left-wing agendas that teach sexually explicit material to young schoolchildren.

During a recent debate against Whitmer, Dixon referenced a Muslim parent who decided to leave the Democrat Party after discovering graphic content from a school and in his child’s backpack.

Late night CBS host Stephen Colbert raised questions about whether or not this Muslim parent exists, thereby prompting a direct response from Dixon.

Facts vs. Fake News
During one of his shows, Colbert claimed that Dixon “made up” Khalil Othman, the Muslim father who exited the Democrat Party because of radical leftism hijacking kids’ education.

In response to this, Dixon tweeted out a direct link to a news report that corroborates the man’s existence. The Michigan Republican then challenged Colbert to not only admit he was wrong, but also acknowledge Othman’s concerns about children’s education.

The Dearborn man I referenced in the debate is real and his story is compelling.

Does the very unfunny @StephenAtHome have the courage to admit he was wrong and acknowledge him? https://t.co/yL78QNBnbw

After Dixon’s response, the CBS host did issue an apology. However, this was later cheapened by Colbert mocking Othman for supporting Dixon.

The Michigan Republican responded to Colbert once more. This time, Dixon wrote a Daily Mail op-ed that condemned Colbert for smearing someone he disagrees with as bigoted without merit.

The Real Reason Behind Colbert’s Attack
Like other Democrats, Colbert’s attack against Othman happened for the sole purpose of discrediting Dixon. Many within the mainstream media are terrified at the prospect of Dixon becoming Michigan’s next governor and undoing the harm put in place by Whitmer.

Gretchen Whitmer should take ownership of the mess our country is in. She thought Joe Biden and Kamala Harris were right for America. pic.twitter.com/diKSKjrvTM

For all of the CBS host’s comments about Dixon, he never once got to the underlying problem here, which is sexually explicit content being funneled into children’s schools.

Democrats struggle to articulately justify this. However, they have no issues claiming anyone who opposes sexually explicit content in kids’ schools is morally deficient.