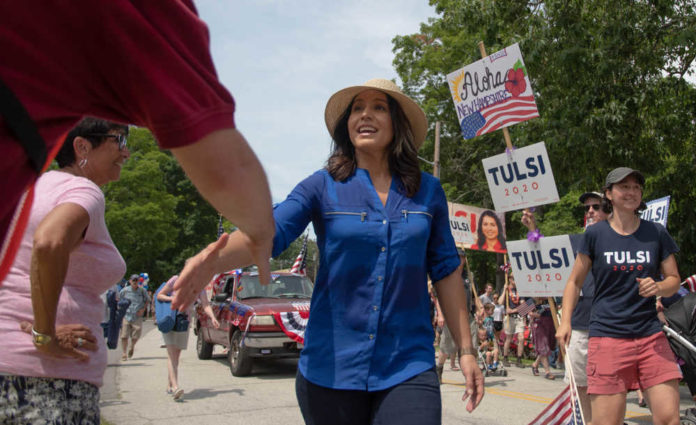 In another last-minute endorsement less than a week before the midterm elections, former Hawaii Congresswoman Tulsi Gabbard has shared her support for Republican candidate J.D. Vance in Ohio’s Senate race.

Gabbard, a U.S. Army Reserve officer, recently announced her decision to leave the Democrat Party in a scathing video posted to her Twitter account — calling the party out for being “under the complete control of an elitist cabal of warmongers driven by cowardly wokeness” and asserting that the Democrats “actively work to undermine our God-given freedoms.”

I can no longer remain in today’s Democratic Party that is now under the complete control of an elitist cabal of warmongers driven by cowardly wokeness, who divide us by racializing every issue & stoke anti-white racism, actively work to undermine our God-given freedoms, are… pic.twitter.com/oAuTnxZldf

Since then, while she has not completely adopted the positions of the Republican Party, Gabbard has endorsed several GOP candidates for the upcoming November 8 midterm elections.

Gabbard asserted in the tweet that Ryan “represents everything that is wrong with the warmongering Washington Establishment.”

“I’m endorsing [J.D. Vance] because he knows the cost of war, and that our government exists to serve the people, not the other way around,” she added.

Vance shared Gabbard’s tweet, thanking her for her support.

“Grateful to have the support of the last person to clean Tim Ryan’s clock on the debate stage. Thanks Tulsi! And thanks for putting country over party,” the Republican Senate candidate wrote.

Grateful to have the support of the last person to clean Tim Ryan's clock on the debate stage. Thanks Tulsi! And thanks for putting country over party. https://t.co/mhaY3D0bQm

Vance’s comment about Gabbard “clean[ing] Tim Ryan’s clock on the debate stage” refers to a moment during the 2019 Democrat presidential primary debate in which Gabbard grilled Ryan for advocating for leaving U.S. forces in Afghanistan indefinitely rather than bringing our soldiers home.

Gabbard clapped back at his comment, asking: “Is that what you will tell the parents of those two soldiers who were just killed in Afghanistan — ‘Well, we just have to be engaged?’”

Ryan has consistently been a supporter of foreign interventionism, most recently with his advocacy for sending billions in U.S. taxpayer money to Ukraine.

Meanwhile, Vance has advocated for a restrained foreign policy, which focuses on bringing U.S. troops home and reducing the amount of American taxpayers’ money that is sent overseas to fund foreign countries annually.

“… we have a leadership in this country that is constantly focused on stuff that has nothing to do with citizens in our country, has nothing to do with the middle-class citizens in my state of Ohio or all across this country, and ladies and gentlemen, it has to stop,” Vance said during the Conservative Political Action Conference (CPAC) this year.

“I’m sick of it. I’m sick of being told that we have to care more about people 6,000 miles away than we do people like my mom, my grandparents,” he added.